Simone Biles superhero?  We think so! “She literally flies without a cape,” says CEO Jazmin Truesdale about Olympic gold medalist Simone Biles.  “It’s only fitting that we make a superhero tribute to her.”

Simone is illustrated in her patriotic leotard/super suit with a light red glow surrounding her.  “Her body activates when she’s in motion,” says Truesdale.  Simone is even doing her signature wink that got her in a little bit of trouble several months ago.  “She winked at Shawn Johnson in the middle of her floor routine! I love that she’s not afraid to be herself,” said Truesdale,” that’s what Aza Comics is all about…women being themselves and not apologizing for being great.” 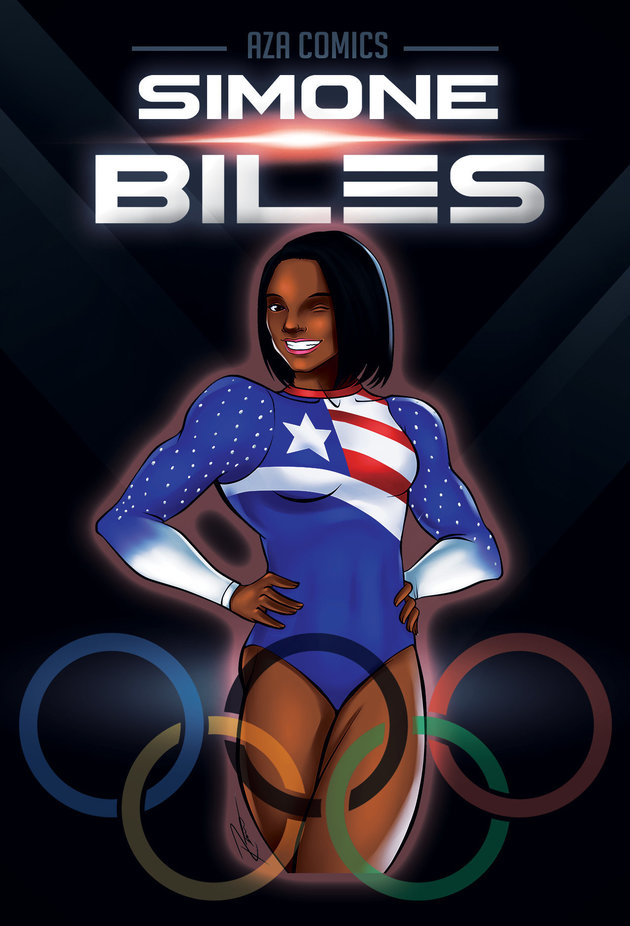 At the Rio Olympics, Simone Biles won an unprecedented four gold medals, more than any other American gymnast in a single Olympic games.  Her gymnastics abilities were seen by millions across the globe as she led the American gymnastics team to its second consecutive Olympic gold medal.  She was the only gymnast to compete on all four events and did not disappoint as she performed solid and consistent routines.

“We’ve never seen anyone do gymnastics like her before.” Truesdale smiled.  This would be an accurate statement as Simone performs some the most difficult routines possible in the sport.  With tumbling passes that catapult her into the sky and near perfect execution scores, there is no wonder as to why Gymnastics legend Dominique Dawes called her the G.O.A.T. (greatest of all time).

Check out more info on this illustration @ USA Today and The Huffington Post!