A Janet Jackson superhero? We all saw this coming.  It’s no secret that Aza Comics’ CEO is a Janet Jackson STAN (just check out her instagram @jaztruesdale) but surprisingly creating a character with personality elements of her favorite entertainer was the last thing on her mind. “My mother gave me the idea,” Truesdale laughs. “Originally, Thema was inspired by my own mother and then one day I was telling her about the character and she says ‘right, so when you do the movie and Janet Jackson is fighting Kiran in a catsuit…’ that’s when it clicked for me.”

The young entrepreneur says that she was writing the upcoming digital book The Keepers: Origins when she noticed that Thema had slowly developed into a character that seemed like a mix of Queen Hatshepsut, Janet Jackson, and her own mother. Interestingly enough Remero Colston, Aza’s illustrator, knew nothing of this. 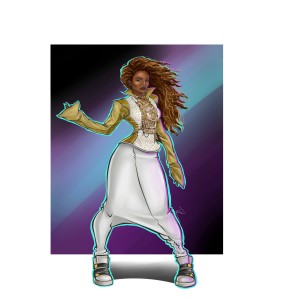 Thema is the Queen of Arjana and the most beloved monarch in the Aza universe.  She is also the mother of Kala, leader of the superheroes.  Although Thema has no superpowers she is skilled in combat, having lead troops into battle since she was 15, and is considered the best warrior on her planet.

“Thema’s personality is all about women’s empowerment.  She also wants to help her own people as well as the rest of the Aza universe.  These are parallel themes often found in Janet Jackson’s music,” says Truesdale.  “While Janet is a woman of privilege she is also very aware of social issues.  Her music not only addresses Black issues but also issues that affect everyone.  I found that element of her personality very befitting of a queen.

“Thema also has the economic and political savvy of Queen Hatshepsut and the ‘I wish you would’ attitude of my own mother,” adds Truesdale.  “Visually, we wanted her to look like an older version of Kala.”

In the first digital book, The Keepers: Origins, Thema’s story kicks off when she first discovers she is pregnant with Kala and the space adventure begins. 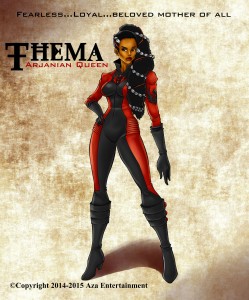 Aza Comics is fast becoming known for its multicultural superheroes so when asked about possible movie adaptations that could include Jackson, the CEO answered with a quick yes.

“Absolutely, the digital novels drop this year, video games end of next year, and I’m already being courted by production studios so if Miss Jackson wants to be a part of the project,  Aza Entertainment would love to have her.”

Find out what to expect from the new Aza universe and buy your copy of The Keepers: Origins today!

Watch the book trailer for The Keepers: 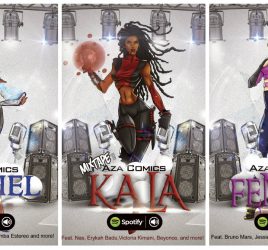 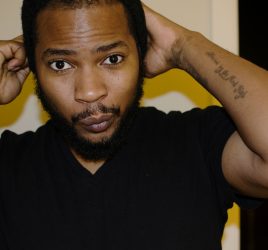