Aza Comics releases The Keepers: Origins, the first digital novel about its new universe of female superheroes.  “It’s very exciting,” says CEO, Jazmin Truesdale.  “I really want to get more women into this genre.  That’s why I created the book the way that I did.”

After interviewing 75 women and girls, asking them why they didn’t read comics Truesdale created ‘novel comics’.  The digital book is a traditional novel but the action scenes are illustrated like a comic book.  “Women like 3 dimensional characters,” says Truesdale.  “We like plot, emotion, suspense and that’s what I tried to do with this book.  I want to change the way superheroes are created and marketed to women and people of color.” 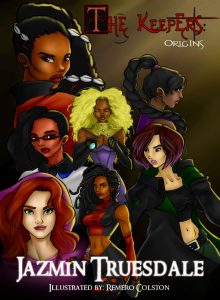 The Keepers: Origins is space opera about five multicultural superheroes from different parts of the world fighting to protect the universe. “They’re called The Keepers and they don’t just fight supervillains,” Truesdale explains. “They also fight invisible evils like racism, sexism, homophobia and the like. Everyone has a struggle and they all deserve to be heard.”

Aza Comics aims to create a new universe of heroes that is more reflective of the global community. The Keepers: Origins is the first installment and the second installment is expected to release in spring 2017 as well as children’s books.

The book is available on the Aza Comics website (with multiple e-reader formats and exclusive images), Google Play, Kindle, Nook, Kobo and will soon be available on iBooks.