I normally don’t write opinion posts but this was something I couldn’t ignore.  As the CEO of a company that creates female superheroes, you could say that I have devoted my life to empowering and inspiring women and young girls.  For this reason, you could imagine my disgust at seeing the rise of Donald Trump in this year’s presidential election.

Donald Trump is not just some entitled idiot running for president.  He is the personification of a mentality.  A mentality that women fight against from the time that they are born.  A mentality that created male entitlement, the ‘casting couch’, rape culture, victim shaming, and the policing of women in every aspect of our lives, even reproduction.

Yes, Donald Trump is that guy.  The guy that we women try to avoid in life yet he always manages to find us.  At the club, on the street… The boss who grabs our ass at work when we walk by.  He knows that we won’t report him.  Why?  Because women often lose in those situations.  Our careers ruined, reputation in shambles all while he continues to sit in his executive office completely unscathed.  All you have to do is google recent rape cases to know that often times men barely get so much as a slap on the wrist for sexual assault which proves that even our judicial system doesn’t care about us. 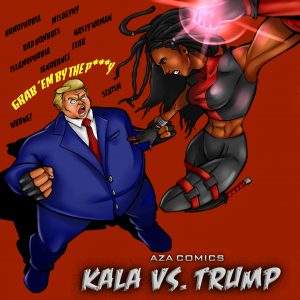 This overgrown oompa loompa is the invisible evil that my characters fight everyday.  It’s a misogynistic evil that can be seen across the globe, manifesting itself in different ways throughout various cultures but nevertheless present.  I don’t expect my characters to change the world but I do hope to give women a voice so that they know they can change their situation.

So yeah…this pussy is grabbing back and I hope many more will do the same. Make sure that you take the time to learn how our government works.  Get involved.  Vote in the mid-term elections.  Our rights are being taken away from because people aren’t paying attention.  Don’t allow that to happen!